From outdoor experiment station to a hub for adventure

From outdoor experiment station to a hub for adventure

Having been to Unicoi State Park & Lodge several times growing up, it wasn’t until I returned as an adult that I realized the historical context of the park. It began as a Civilian Conservation Corps camp in the 1930s. The Corps built the camp along Smith Creek, north of the present-day lodge in the bottom of what is now Lake Unicoi. Meanwhile, Helen was developing, and local businessman Charlie Maloof saw the need for a new road to replace the Unicoi Turnpike. He pushed the state to build it and the new road became Ga. Highway 75.

As Helen became more populated and well known as the home of a popular mountain lodge, Maloof continued pressing the state for help in the area. The lodge burned in 1945, and Maloof doubled down on his efforts, eventually persuading Georgia to open White County Area State Park, for which Gov. Herman Talmadge credited Maloof as the driving force. The park included 278 acres and another 1,800 acres of leased federal government land. 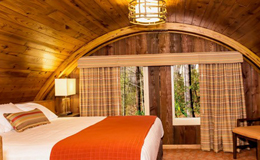 In the 1960s the park was renamed Unicoi Outdoor Recreation Experiment Station, which by 1974 included barrel cabins, an innovation intended to attract more people to take advantage of the outdoor recreation opportunities. The barrel cabins were designed by the University of Georgia to allow flora and fauna of the region to thrive with minimal human interaction. I recently stayed in one of the cabins, which still stand today and are available for families to book for exciting vacations. Our cabin was two stories and featured rustic décor, a fully equipped kitchen, spacious bedrooms, and decks with beautiful views of the surrounding woods and the 53-acre Smith Lake, which is often referred to today as Unicoi Lake. It was a fun and distinctive way to experience the North Georgia mountains and offered us easy access to all the park’s adventures. The experiment station was later renamed Unicoi State Park in 1974 in honor of the Unicoi Turnpike, which was the primary route for white settlers passing through Cherokee territory starting in the 1830s.

The park began taking its modern form in 1982, the year I was born, when ground was broken on Unicoi Lodge, just a few miles from Helen. Helen had developed over the previous decades as a Bavarian-style village that was attracting millions of visitors each year. The lodge was the first of its kind in Georgia and inspired the building of other state park lodges such as Amicalola Falls State Park & Lodge. Helen, which by then was becoming one of the state’s most vibrant tourist attractions, is now a hub for outdoor recreation in the Southeast and attracts millions of visitors annually.

As the state park developed, it was perfectly situated adjacent to Anna Ruby Falls and the Chattahoochee National Forest. The stunning twin waterfalls plummet more than 150 feet and are accessible via a short, paved hiking trail just a mile or so from the state park. There is also the 4.6-mile Smith Creek Trail that allows visitors to hike from the state park to the base of the falls.

The falls, the state park and Helen combine to create the perfect marriage of adventure and outdoor recreation and are together one of the most sought-after vacation destinations in the Southeast. Unicoi State Park & Lodge today includes more than 1,000 acres of protected land, a 53-acre lake, world-class camping facilities and cabin rentals, and the architecturally stunning Unicoi Lodge and Conference Center.

During our stay, I fly-fished for hours, pulling one trout after another out of Smith Creek, catch and release of course. We zip lined at the Screaming Eagle Aerial Adventure, on which we reached speeds of more than 50 mph while hanging over the lake. We threw tomahawks and fired air rifles, all in one day, and enjoyed plenty of family time kayaking on the lake and hanging out at the barrel cabin we rented for a long, four-day weekend. We hiked as well but plan next time to hike the trail that connects the state park to downtown Helen.

As a child I never considered that Unicoi State Park & Lodge had ever been anything but what it was when I was 8 years old – a fun and wild state park with adventures around every corner.

Make plans for your next Georgia mountain adventure by visiting the website or calling 706-878-2201 to book a stay in the lodge, barrel cabins or Smith Creek cabins. Adventure activities can also be booked in advance of your stay here: https://checkout.xola.com/index.html#seller/5e383d6d1739ce797d698e92.